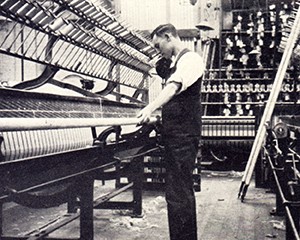 Owing to the expense of hand-made lace, efforts were made during the late 18th century to replicate it by machine. Hand-operated hosiery knitting frames were adapted to produce a net onto which hand-embroidered patterns were sewn to produce ‘lace’. Inventions during the early nineteenth century further modified the machinery to produce twisted (or bobbin) net which more realistically mimicked hand-made lace. Most of this development work was done in the Nottingham area, leading to machine-made lace becoming known as Nottingham lace.

There were nine bobbin lace manufacturers operating hand-powered machines in small workshops in Long Eaton. This small nucleus gradually increased, and by the early 1840s William Bush, who is thought to have come from nearby Beeston, set up business in Long Eaton and about 1843 he built a lace factory in Main Street where his machines were driven by steam power. Bush also built a gas works in Chapel Street to provide good artificial lighting.

The predominantly Leavers type of plain net bobbin machines were fitted with a modification to take a jacquard punched card device to make the mechanically patterned lace with which we are familiar and which was used extensively in the clothing industry.

By the mid-19th century 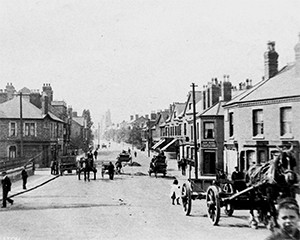 Machines were employed in the town which began to develop into the centre of the Leavers lace trade and the town prospered and grew. The census returns between 1851 and 1901, show that the population increased from 1,000 to 13,000 (20,000 including Sawley). Skilled twist hands (lace machine operators), card punchers and lace mechanics moved to the town to take advantage of the many work opportunities available.

Five tenement factories were built during the 1870s and a further five in the 1880s. By 1905 around 800 machines and 1,200 twist hands were at work in the area. Several lace factory owners built fine new houses on Nottingham and Derby Roads and speculative builders built streets full of houses to accommodate the influx of workers.

Before the First World War

Demands of the international market caused a boom in the lace trade. Harrington Mill alone contained 255 machine standings and was the largest of all the tenement factories. The standings were rented out, allowing smaller enterprises to flourish. At one point, Harrington Mills housed 26 separate ventures of this type. During the early 20th century, after electricity was made available, Oakley’s, Britannia, Phoenix, Stanley and many others mills were built in a single storey north-light style to be more spacious and with improved lighting.

Names such as Fletcher, Smith, Austin and Orchard were important names in the local lace trade. Lace machine building also developed in the town. Companies such as Wallis and Longden, Longmire and Spridgeon exported machines world-wide. The period before WW1 saw the industry reach its peak.

T­­­­he lace trade experienced a sharp decline, the main reason being a change in fashions. Many of the older machines were scrapped and newer ones sold to overseas buyers. By 1941, only 21 factories were still producing lace.

Lace manufacturing in Long Eaton continued until 2001 when Grangers in New Tythe Street, the last company producing lace, closed down. Perhaps the only reminder of this famous company remaining in the town is one of their creels in regular use at Renaissance Trimmings in Bridge Street, feeding a Rope Walk, built by Lace Mechanics of Long Eaton.

The majority of Nottingham Lace used in the clothing industry was actually produced before the First World War in the Erewash area, with Long Eaton being the main contributor, however, very few people were aware of this at the time. 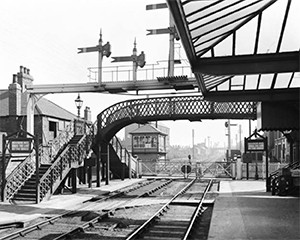 Railways have also played an important role in shaping the industrial landscape of the town. In 1839 the Midland Counties Railway opened the line from Derby to Nottingham with a station in Long Eaton. This gave good access to the lace market in Nottingham where the lace trade merchants and finishers were located.

A few years later, in 1847, a line was opened from Long Eaton northwards through the Erewash Valley to draw on the output of the Nottinghamshire/Derbyshire coalfields. This line passed through the centre of Long Eaton and in 1851, on the line at the end of Main Street, Samuel Claye, a Derby coal merchant, opened the ‘Manor House Works’ to build railway wagons. By 1861 he employed more than 200 people producing over 1,300 coal wagons a year for the Midland Railway. Claye also built a row of houses on New Tythe Street for his workers. 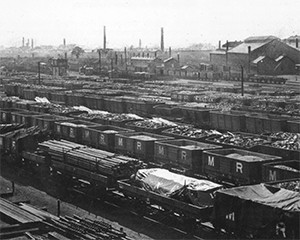 Toton sidings, on the northern boundary of Long Eaton, were also a consequence of the Erewash Valley line. Coal from the collieries to the north was sorted for distribution to destinations to the south and west of England. This complex of sidings and locomotive depot was one of the largest in the country, and employed a large proportion of men from Long Eaton. Toton was the home of the famous Bayer Garrett locomotives which hauled exceptionally heavy loads of coal. The Toton Shed number 18A was proudly displayed on the locomotives. The Midland Railway built a large housing estate for its employees on the site where the Asda supermarket and car park now stand.

The town has played host to a number of well-known businesses: 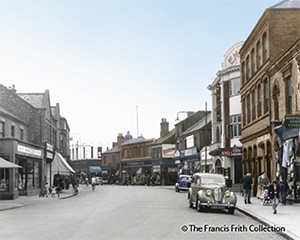 Furniture Making in other parts of the UK

Furniture makers were grouped in various areas around
the country.

Scotland
From 1845 until 1980s, Beith in the West of Scotland had the honour of being the most important furniture manufacturing town in Scotland with a reputation for the highest quality of cabinet making.

Companies included Matthew Pollock, credited with the fitting out of both RMS Queen Mary and RMS Queen Elizabeth. McNeil Brothers, Robert Balfour and the West of Scotland Furniture Manufacturing Co., Limited, later renamed Beithcraft. Sadly there is no furniture manufacturing in Beith today.

London and the South Coast
The East End of London and the south coast was a huge manufacturing base for Cabinet Makers and Upholsterers. Traditional case goods were made by well respected companies like Frederick Smith & Sons, Adam Richwood, Rushton Brothers and Sidney Sutton and a host of smaller business.

The largest furniture maker was Bevan Funnell Limited based in Newhaven, East Sussex, making high quality English reproduction furniture. Barry Bevan Funnell started his company in 1945 with £50.00. The company was awarded the Queens Award for Export in 1967 and again in 1970 with showrooms and warehouses in located in Salavaux, Switzerland and High Point, North Carolina. After the death of Mr Funnell in 2007, the company went into notional employee ownership, though managed by a non-executive board, one of whom purchased the company, closing its showrooms and warehouses abroad whilst keeping a small workforce in the UK.

Perhaps the most famous name in London was Waring and Gillow – their history goes back to about 1730 in Lancashire opening a branch in London at 176 Oxford Road, now Oxford Street in 1764 and rapidly established a reputation for making and supplying high-quality furniture to the richest families in the country

High Wycombe
It is recorded by Daniel Defoe, author of the classic novel Robinson Crusoe, that there was ‘a vast quantity of Beechwood which grows in the woods of Buckinghamshire more plentiful than in any other part of England’. He also added that this timber was used for beech quarters for diverse uses, particularly chair making and turnery wares today.

High Wycombe became famous for making ‘Windsor Chairs’. Between 1800 and 1860, the number of workshops in High Wycombe grew from a handful to 150 and, by the end of 1875, their total output had risen to an estimated 4700 chairs a day. High Wycombe became the biggest producer of chairs in the country, with the population increasing by 46%.

Many other furniture companies contributed to High Wycombe’s claim as the capital of the UK in terms of furniture such as Parker Knoll, Ercol and Gomme (G-Plan)

The relocation of many London based companies to High Wycombe during the war caused property prices to soar, making it more and more expensive to maintain factories locally. The number of workers had fallen from 10,000 in 1939 to 8,000 by 1960.

Advances in wood treatment and mechanisation raised output per man, and whilst production continued to rise, employment fell to some 4,000 in 1990.

The 1990’s saw a huge change with the recession claiming the famous ’G-Plan’ factory with the loss of 700 jobs, and the closure of the oldest surviving cabinet maker Thomas Glenister. There followed the decision by Parker Knoll to stop making furniture in High Wycombe.

In 1990 Ercol, Wycombe’s largest furniture maker, announced it was moving to a state of the art factory in Princes Risborough.

For the finest British upholstery…